The scientific objective of ESR13 consists in the design, synthesis and the electrochemical and optical characterizations of new electron-donor (D) or electron-acceptor materials (A) for organic photovoltaics (OPV). For instance, one of the main class of electron-donor materials D developed by ESR13 will deal with push-pull conjugated molecules eD--eA, where eD and eA are an electron-donating and an electron-accepting blocks, respectively. Their synthesis and characterization imply a training in heterocyclic chemistry and various analytical techniques, respectively. The ESR will learn how to carry out the fabrication of organic solar cells to assess the photovoltaic potential of their new organic materials. This part of the project will be carried out at the University of Angers (UA) under the daily supervision of Dr. Philippe Blanchard and Dr. C. Cabanetos.

Promising materials will be synthesized in relatively large quantity and transferred to our colleagues from the SEPOMO consortium for in depth photophysical characterizations and optimization of organic solar cells. 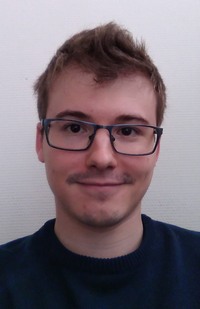 José María Andrés-Castán was born in Zaragoza (Spain) where he spent the first years of his career (Degree in Chemistry and Masters in Nanomaterials at the University of Zaragoza). He carried out his Bachelor’s and Master’s theses on the synthesis of new molecules for Dye-Sensitized Solar Cells (DSSCs) and on the fabrication of these cells. Then, he worked for a year in a private company related to metallic nanostructures and surfaces, Nanoimmunotech S.L. After that, he returned to the University of Zaragoza for a year as young researcher in DSSCs. In October 2018 he started his PhD thesis under the supervision of Philippe Blanchard and Clément Cabanetos in MOLTECH-Anjou (University of Angers, France). José María is currently emplyed as a post-doctoral researcher at Commissariat à l'énergie atomique et aux énergies (FR)